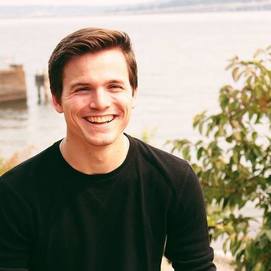 Favorite Song Performed with The Naturals
"Can You Do This?" by Aloe Blacc

Favorite Group Memory
Winning the second place slot in the ICCA Quarterfinals and advancing on to the ICCA Semifinals on the first ever attempt!

Musical Influences
My entire family sings. When my three brothers and I were kids, we all learned how to play piano. For as long as I can remember I've been singing and making music. It's just a huge factor in my life at home and I'm glad it has been so prominent here at Marquette, too!

Best Part of Being A Natural
Definitely the brotherhood. We are basically a fraternity in how we view each other as friends and brothers and this is such a great group of guys to hang out with.

If you could be one thing, what would it be?
I would be some kind of bird, preferably a bird of prey. I have always loved the idea of flying and a bird of prey owns the sky and has nothing to fear. And hey, I'm a Golden Eagle!

What would you do with a million dollars?
I'd pay for my college, put aside half of the rest for security, then set the rest up as an allowance that I would spend on whatever caught my fancy.

If you could have one mediocre superpower, what would it be?
Mediocre? Well I'd love to fly, as I said before, but as for mediocre, I'd be happy with invincibility. Going through life without worrying about getting hurt would be an awesome gift.

If you had to describe yourself as a household appliance, what would you be?
​I would be a heater. I try not to be too noticeable, but make others comfortable when they need it.​
Powered by