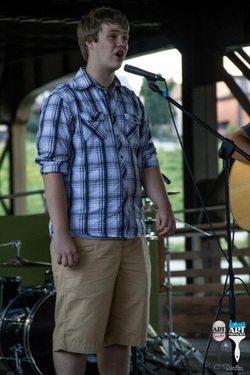 What do you do in The Naturals/Vocal Part: I sing baritone for The Naturals. In addition to singing I am also the group's Vice President and deal first hand with much of our arrangements either by composing some of them myself or by reviewing and editing the arrangements put together by other members.

Favorite Song Performed: Interesting question, I think my favorite song I have ever performed with the group would be "Madness" by Muse because it was one of the song's where the group first really came together with a solid blend and emotional performance behind a killer solo.

Favorite Group Memory: Without a doubt, my favorite group memory is performing on the ICCA stage for the first time as a group. Ever since I joined the group, I always wanted to push the group to compete in ICCA's and it was an incredibly awe-inspiring and unreal moment to be able to perform with the group at that level.

Musical Influences: ​I find that a lot of my musical influences come from both traditional and new folk music. Some of my musical influences in this vein would include The Head and the Heart, The Tallest Man on Earth, the Carolina Chocolate Drops, The Staves and Bob Dylan. In addition to these artists, I also find a lot of inspiration and influence in the works of both Neil Young, Sufijan Stevens and Linda Perhacs.

Best part of being a Natural: I think the best part of being a Natural is being able to make beautiful music with a group of my peers. Making and performing music is a surreal, almost supernatural experience that transcends time and place and being able to participate in this act with a group of guys that I love to spend time with is definitely the best part of being in the group. Being involved in a group that can be completely created and molded by its members makes performing with the group incredibly powerful.

What do you do outside the Naturals: Although I would love to spend every waking moment of my life doing things with the Naturals, I am also involved in a lot of things outside of the group. In addition to being a full time honors student at Marquette, I am also the Assistant Director of Debate for Marquette University High School where I teach and coach students how to debate and I am an Executive Board member of the Milwaukee Area Student Affiliate of the National Council of Teachers of English.

If you could be one thing, what would it be: ​Either a book of poetry or a street sign overlooking a beautiful scene in a national park.

What would you do with a million dollars: ​Either donate it to the Naturals or figure out a productive way to use it to help fund arts and music programs in public schools.

If you could have one mediocre superpower, what would it be? Does automatic house cleaning work as a mediocre superpower? Whenever I change clothes the previous set of clothing would be cleaned and folded automatically, or whenever I finish using a dish of any variety it appears back in the cabinet clean and ready to go.

If you had to describe yourself as a household appliance, what would you be? Probably something along the line of an electric tea kettle. Something with an on and off switch that can be found easily because when I have my "on" days I can be very productive and generate a lot of productive energy...but on my "off" days, that water stays nice and room temperature.
Powered by