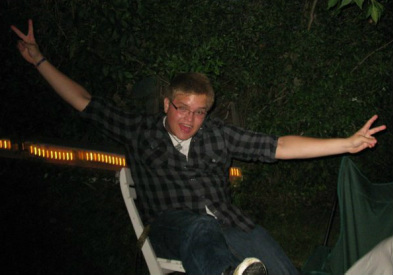 What do you do in The Naturals?
I'm the Treasurer, which basically boils down to having a Naturals Debit card, buying things for the group, reimbursing group-related expenses, and managing the group bank account.  I'm also one of the group's Fundraising Chairs, meaning Joe Mohr and I brainstorm, plan, and manage The Naturals fundraising endeavors.  Also, even though I know absolutely nothing about music theory, I'm an amateur arranger and manage to pump out at least one usable song per semester.  I sing Tenor 2, Tenor 1, and occasionally Beatbox.

What's your favorite song the group has ever performed?
Definitely "Mary Did You Know" with "I Want You Back" in a close second.  Honorable mention to Charles in Charge.

Best part of being a Natural?
It's really hard to pinpoint a favorite part, but if I had to choose... You can't beat the feeling you get when performing A Cappella-style music on a stage with some of the best friends you'll ever have. That's pretty damn satisfying.

Favorite memory?
Singing the National Anthem at the 2012 Marquette vs. Georgetown Men's Basketball game and then exiting the Bradley Center by climbing over the parking lot fence.

What do you do outside of The Naturals?
I'm a member of the Sigma Phi Epsilon Fraternity and I bartend at the Annex.  In my free time I'm either playing guitar or video games.  I love airsofting and sledding with my friends back home.  I absolutely love being in the outdoors and go camping or backpacking whenever possible.  I like to fool around with directing and video editing. I also like to bike a lot.

If you could be anything, what would you be?
Professional Adventurer.

What would you do if you won one million dollars?
I'd set aside enough to pay for my kids' college, and then I'd buy a custom Alpine White Les Paul guitar, a '67 Chevy Impala, and then a bunch of quality recording equipment.  I'd buy my mom a boat, I'd buy my sister a home kitchen, and I'd send my dad on a commercial flight into space.  Whatever money was left would go to Kiva or something.

If you could have one mediocre superpower, what would it be?
I'd love to be able to control the weather, like to make it stormy whenever I wanted.
Powered by